Masjid Al Haram, The Sacred House, the first House founded for mankind (the word ‘house’ referring to a place of worship) at Mecca, Saudi Arabia. 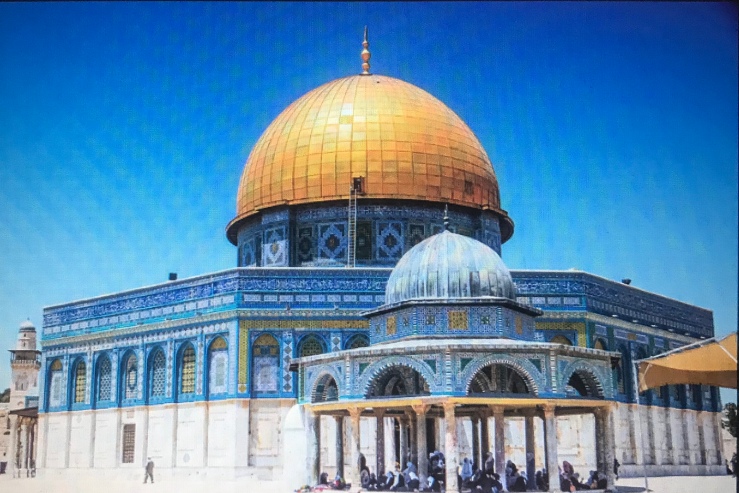 (“Glorified by He [Allah] who transported His servant [Muhammad (saws)] by night from Masjid al-Haram to Masjid al-Aqsa whose surroundings He has blessed, so that We may show him of Our [Allah’s] signs…”) (Al-Qur’an: 17:01)

Islam is defined by “Five Pillars” – basic rituals that are obligatory for all members of the Islamic community who are physically able to perform them. The Five Pillars include: the profession of faith (shahadah); daily prayer (salat); fasting during the holy month of Ramadan (sawm); annual almsgiving to assist the poor or needy (zakat); and participation in the annual pilgrimage to Mecca at least once during one’s lifetime (hajj). ALL muslims religiously follow these without any whimper or disconnect.

Every Muslim believes that there is only one God; He has sent numerous messengers, with Muhammad (PBUH) being His final Prophet; God has revealed Holy Scriptures, including the Quran; God’s angels exist, even if people cannot see them; there will be a Day of Judgment, when God will determine whether individuals are consigned to heaven or hell; and God’s will and knowledge are absolute, meaning that people are subject to fate or predestination.

Although there is no iota of difference in the beliefs of the followers and yet they practise very differently from that ordained. They have totally ignored this verse,

The existence of 57 Muslim nations instead of one, bears witness to this unfortunate fact. We find all the excuses in the world to create division amongst ourselves. We divide ourselves according to race, sect,  pre-Islamic cultures, political opinions, ancestry and even on the imams we follow! Are these excuses for separation considered valid by Allah? Should we not consider them invalid?

As individuals we consider ourselves as an Umma, we like to believe in ignoring these religious differences and divisions and carry on with our lives. But our religious scholars are more interested in maintaining these differences by creating a sense of virtual unity that hides their sectarian differences. They prefer not to work for real unity because it exposes their differences. In fact, they are more interested in practicing virtual Islam rather than the real Islam our Prophet (PBUH) practiced.

This is exactly that is happening in India at this moment. The clear divide between the Shias and the rest of the Muslim community is out in the open and very disturbing.  Why has the Shia community not joined, not only their Muslim brethren but also volunteers from various faith in the protests against bills passed and the proposed actions by the Government? I fail to understand their logic however, let me present my perception of their action and the possible fallout.

Keeping aside the major so called religious differences, which are primarily kept alive due to political considerations, has the Shia community deliberated with a degree of caution on the reasons for the present impassioned situation with circumspection and prudence.

Are they of the opinion that the refugees from Pakistan, Bangla Desh, Myanmar and Afghanistan do not matter to them as these countries mainly have Sunni Muslims? If this is one of the reason, it is apparently very short sighted and extremely harmful for the community. Reasons for which will be discussed later.

The present Government has a dogmatic agenda which clearly spells out in favour of majoritism, one religion, one language, one doctrine, one tenet and so on. God forbid will the Shias  succumb to these? Will they loose their faith and identity? I am a Shia, and I wish to be buried with the maulvi reciting the namaze janazah for my passage to the next world. I will fight to achieve it until my last breath.

The spontaneous and overwhelming protests throughout the country have powerfully and eventually established that democracy now has deep roots in the country. The existing Government though masquerading as a votary is systematically destroying the  institutions which safeguard our democracy. Their short term pernicious design will end ignominiously due to their inherent inadequacies and glaring contradictions, when they face the might of the masses again at the electoral altar of  justice.

The Shias sadly will find themselves isolated and cloistered, their leaders craving to endear themselves to the new dispensation. Their effort may yield results and they may gain acceptance from the new Government. But what about their equation with the non Shia Muslim community?  What will they say to the vast population of non muslims who have voted out their ally?  Will their ‘brother’ Muslims be exculpating and condonable? For ages the young generations of Shia community will suffer on account of the sins committed by their misguided elders.

Many Muslims (especially of influence in society) think that the idea of unity of humankind is an unrealistic goal and therefore, should be abandoned. According to them, this may be a romantic or an exotic idea but it is an unattainable goal. They catalog a long list of such divisions from (Muslim) history. Wars fought (and continue to be fought) amongst themselves and (millions of) Muslims killed by Muslims are given as proofs from past and present history to support their claim that Muslim unity is not possible, let alone the unity of humankind. How can then one talk about Muslim unity when their past history has been so divisive, they are quick to remind everyone?

The most shameful division among Muslims is that of denomination; the major ones being sunni, shia, and ismaeli. These are all artificial divisions which have absolutely nothing to do with Allah’s revealed Deen. Who are we to cut up Allah’s Deen into little pieces, especially when Allah has forbidden us to do so? This is a crime committed by nearly 1 billion Muslims. A study of the history of these sects reveals that these divisions were created PURELY by political disagreements. Later, interpretations of the religion lead to these being converted as religious differences.

In many of the countries in Central Asia, most Muslims do not identify with either branch of Islam, saying instead that they are “just a Muslim.” A similar pattern prevails in Southern and Eastern Europe, where pluralities or majorities in all countries identify as “just a Muslim.”

Shias are faithful followers of Hazrat Ali Alaihis Salam(PBUH) hence the title. I am seeking his help to guide the Shias. He forever stood for the unity of the Ummah.

Can we the Muslims do the same in India. What about me? Of course “just a Muslim!”

I have attempted to write this article to assuage the requests received from my friends (name not mentioned) as stated below:

I will be extremely happy my friends, if your satisfaction on a scale of 10 is very modest!