“Sorry son, neither me nor your father have met or beheld or talked to her,” my mother whispered in my ears as we drove down from Faizabad to Unnao. Neither had I seen her or even talked to her as it was not permissible then; moreover, as I was at Nathang, Sikkim, living at 9000 ft and busy and had left it to my mother to choose and proceed. To make matters worse the Maulvi seated next to me kept bumbling his monologue on the officiousness of married life. He was wedded for the past fifteen years, was father of two children and was now journeying to administer me into matrimonial bondage. I had no other option but to curse my fate, inaudibly.

I did feel slightly relaxed at the sight of the handsome and charming siblings of the bride, surrounding me while the nikah ceremony proceeded. It was after a few  hours of disquiet uneasiness that I saw her face in a ceremony, as she lifted the heavily embroidered dupatta (cloth cover) from her face.

On 13th June 1970 I beheld a delightful, alluring, delectable and attractive companion raise her eyes with a faint smile on her lips! All my misgivings departed in a flash. She was Nilofar in Persian and Lotus in English, and from then on gratifyingly forever, an exotic fragrance in my life! Silently I thanked the Almighty, my parents and her uncle Sqn Ldr Zafar Abbas Zaidi, his wife Naseem for arranging this union.

The journey embarked in heavenly ambiance as she offered me an apple plucked  by stretching her hand out of the window of our bedroom of a house in an orchard in Srinagar. From then on she continued to confound me with her manifold endowments. I watched her for hours as she sat in Nishat and Shalimar gardens, painting on her canvas nature’s  beauty all around us. Over the years, every now and then she continued to paint and many of her paintings adorned not only our abode but also hung on the walls of the residences of our dear children.

She shed her burqa and adjusted to the environment she found herself in. Born in an orthodox Shia Muslim family her upbringing was nurtured in a fairly liberal environment. Having lost her father in her childhood she was fostered by her grandfather, an ICS officer. The heterogeneous mixture of conventional and informal rites, rituals and ceremonies, both religious and social were understood by her and formed part of her life. I had missed praying so far, now due to her, I became a regular namazi. Paid more attention to the Quran, and the Majalises during Muharram which she organized in our house. She invited persons of all faiths to attend these Majalises.

Besides wielding the painting brush she was fond of music. Her melodious and heart rending voice brought tears into the eyes of the Momins when she recited a naoha (verse) during Muharram. Soon she trained her voice under the guidance of known music mastereos and sang popular ghazals in large gatherings, enthralling the audience. She had acted in dramas and skits during her college days which facilitated her to perform on the National Television as a leading lady in dramas. We also saw her as a model for a hair shampoo promotion on the screen, in theaters and on the television An offer from a renowned filmmaker was declined by her, partly on my insistence as I did not want to lose her to the glamour and glitz!

Her two sons Jafar and Baqar and daughter Sabila were her esprit and fervor. She was much closer to them than me, largely due to the complexity of my professional life. She alone has the exclusive accolade and distinction for shaping them into loving and caring children who have prospered by the grace of the Almighty, and substantiated and enhanced their prowess and acumen. An anecdote reflects this; the understanding between us was that up to the fifth class the children will be under her tutelage, thereafter I would take the responsibility of teaching them. This happened partially. She kept her side of the deal, I never did,  the children point blank refused my assistance and turned to self tutoring!

Compassion was embedded firmly in her heart and mind as a result she attracted every person she met and conversed with. My parents and relatives with whom I had spent many years before she had arrived, were now more comfortable with her and often favored her. I searched for a single person with whom she had an altercation, argument, dispute, misunderstanding, squabble or even a tiff. I found none; though I have a fairly long list of such persons with whom I have these issues! She stood firmly in her beliefs,  values, never compromised and respected others for theirs. She stood by her relatives and friends in the hours of their need and was with them whenever she could.

Her empathy towards the financially challenged persons was amazing and often exasperated me. Let me illustrate it with a few incidents. She was gifted with the art of designing and creating fashionable clothes and to showcase her interest she opened Addiction Boutique. Among the number of workers, a lady assisted her, whom she trusted. One morning she found her boutique door lock open and money missing from her table drawer. At my insistence the police inquired and interrogated everyone. Ultimately the lady assistant broke down, confessed and returned the money. Next morning on meeting her in the boutique I was shocked to find the lady assistant in conversation with her and busy with a given task. Before I could speak, she took me aside and gave me the reasons for keeping the lady. The Lady had wept and beseeched pardon from her, more importantly, her husband was on a very low salary job which was not sufficient to feed their two children: I shook my head and left in sheer disbelief. When she was sufficiently satisfied with her creative effort she called it a day and handed over the profitable boutique to her manager at no cost!

Our house in Secunderabad was nearing completion when she asked me to help out our lady cook, who too had decided to construct her house. After a few inquiries I learnt that a substantial amount was required for this house. I belly ached, but on her portentous insistence I had to spend the money; the cook’s house came up before ours did. In the bargain I had to compromise in certain areas and aspects of our house, which was willingly accepted by her.

Four years back the ground slipped under my feet when she was diagnosed having the dreaded disease. She was rushed to Boston and admitted in Brigham and Women hospital. She recuperated considerably after her surgery and chemotherapy and was allowed by her doctor to attend her nephew’s marriage in Lucknow, India. While returning to Boston we stayed in Dubai and visited Egypt, Turkey and Greece. Throughout she endured the journey notwithstanding that in Egypt she fell on the pavement and fractured her shoulder bone. She never complained and her resilience and doggedness kept her buoyant and cheerful. On reaching Boston she was treated with radiation and chemotherapy as her disease had returned. Her shoulder bones were bandaged and left to set without  operating. Throughout she remained stoic and steadfast, always a smile for all of us.

After three months when she complained of pain, the doctors examined her and gave up all hope. We shifted her to Dana Ferber hospital where the doctors treated her with radiation and chemotherapy. This continued for over a year and due to the Covid 19, as precautionary measure, we had to take her to Christiana Cancer Care Hospital in Delaware where she underwent the same treatment. A week back all of a sudden she relapsed and closed her eyes. Her doctor showed her helplessness and removing the life supports sedated her with morphine to minimize her pain.

All our children including her niece Subaika took turns to be at her bedside in turn. At 2.30 Pm she opened her eyes and looked at Subaika and me. Her mouth too opened briefly and I did perceive that she was conveying her Khuda Hafiz to me silently. She then closed her eyes never to open it forever. On 4th Aug 2020 my Lotus had found her Heavenly abode after having suffered for so long.
Inna lillahi wa inna ilayhi raji‘un; “Verily we belong to Allah, and verily to Him do we return.” 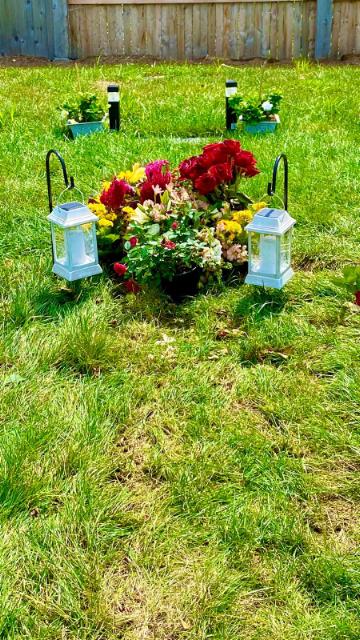 18 thoughts on “The Lotus of Our Hearts”